The history of 3D printing is older than thought. In fact, it dates back to the 19th century. threedom takes you on a journey through time, including a murder.

French sculptor/photographer François Willème from Paris presents the world’s first 3D scanner, which became the forerunner of photogrammetry. He photographed an object from several perspectives with 4 cameras in order to create a 3D model using pantography. 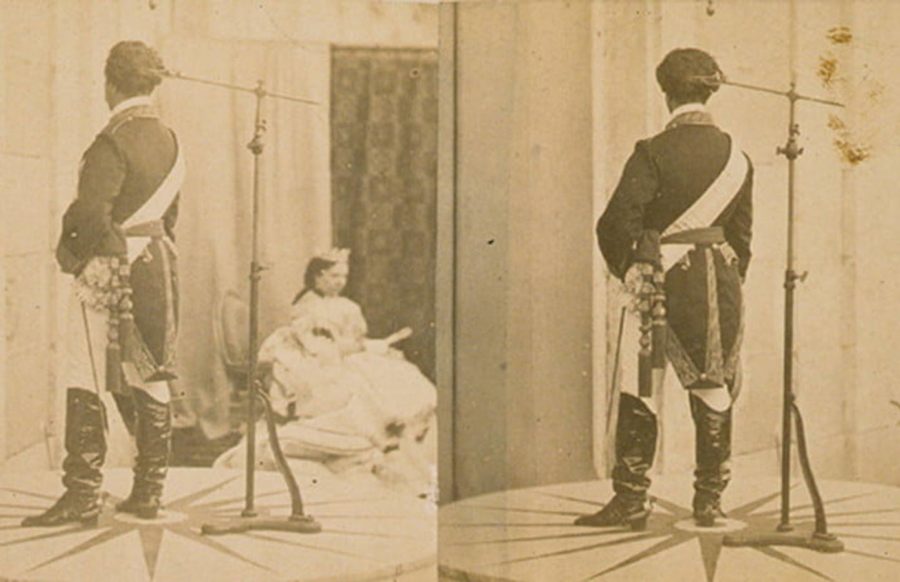 In 1864, the inventor himself states in his patent specification to the United States Patent Office that his process enables unskilled people to create sculptures from living or non-living models. He believes this is done at a higher speed and lower cost than traditional methods. In addition, he writes that his method can also generate smaller or larger objects than the original. 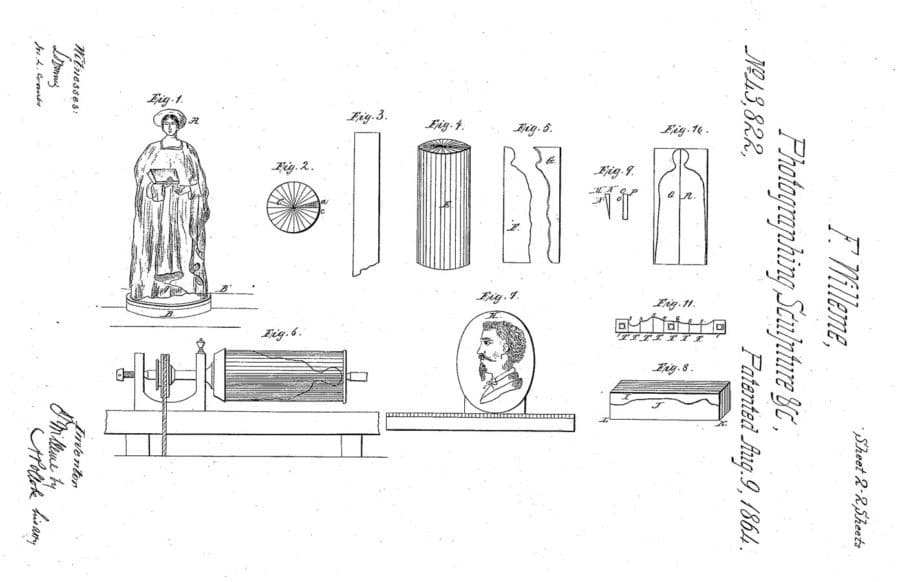 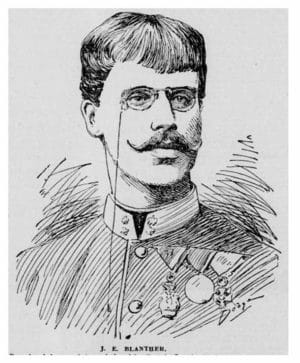 In 1892, Joseph E. Blanther, a native of Austria, invented a method for creating relief maps. These were created by laminating wax sheets and then cutting the mold from the wax sheets by then gluing them on top of each other. So, like 3D printing today, a 3D map was created layer by layer. 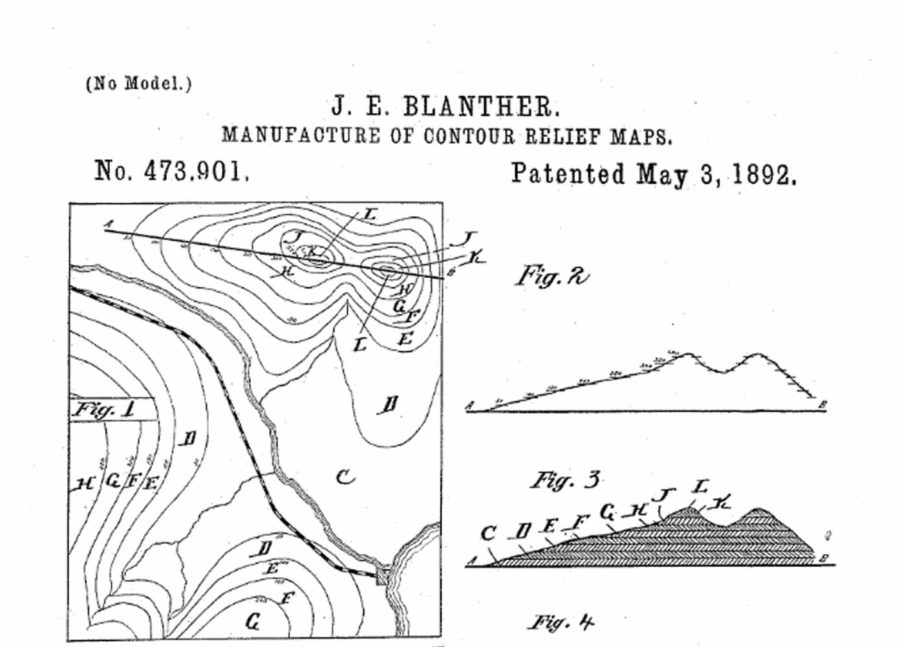 Unfortunately, his invention does not seem to have brought the desired success. Nevertheless, he lived large. He financed his “lifestyle” through “friendships” with rich women and widows. His life as a visionary possibly ended the moment he murdered one of his partners in her home.

It wasn’t until two years later that he was caught, after a man saw his picture at the sheriff’s station in a small Texas town and recognized him. Joseph was now a teacher in a place called Koppearl and had changed his name to Archibald Forbes. After his true identity was revealed and he was caught, he killed himself in his cell with a cocktail of poison. Apparently he was prepared for his capture and had hidden the poison in his hat.

The Knight Falls: The Murder of Mrs. Langfeldt, 1896, San Francisco

20th century: The Century of 3D Printing (so far)

In the 20th century, 3D printing initially experienced a long dry spell, according to research. After the invention of the relief maps, no innovative further developments of the technique were recorded at first (as of 03/2020 – but I’m still researching here to maybe find something after all)

Here I must admit that for a long time I described Chuck Hull as THE inventor of 3D printing. For this reason I will change some texts in the blog in this regard. As you will see, there is actually no such thing as an inventor in that sense, because different twists and turns in history meant that some earlier inventions just didn’t get the acceptance they needed before Chuck Hull’s patent.

Dr. Hideo Kodama of the Nagoya Municipal Industrial Research Institute in Japan was one of the first researchers to address the principle of curing liquids using a laser beam. He filed his patent for this as early as 1980 with the number JPS56144478A. He described the principle in his patent application as follows:

“A vat of photopolymer material is exposed to UV light. This light hardens the material in the vat, creating a model layer by layer.”

Stereolithography also works according to this process. Unfortunately, he had problems with the financing of his patent and could not register it completely within the one-year period after filing.

Alain le Méhauté was researching fractal geometries and was looking for a way to prove to his skeptical colleagues that his equations were correct. For this reason, he researched a method with which he could also show his calculated objects plastically.

Thus, several discussions with Olivier de Witte and Jean-Claude André resulted in the idea of a device that hardened liquids when they were irradiated with light. Her first print object was a spiral staircase. They registered their patent for the stereolithography process three weeks before the American Chuck Hull. In 1986, the French patent was granted and the name stereolithography entered history. Last but not least, by the.STL file extension we know.

However, their invention did not find the support they were hoping for. The institute where they worked did not see any marketing potential in it, which meant that no further funding was made available to produce a market-ready product. The institute did not see the invention as a 3D printer, but rather as a machine for the plastic implementation of complex geometries and equations.

Learn more: French invent stereolithography, but no one cares…

In the early 1980s, Chuck W. Hull worked for a small company that used UV light to give tables a tough plastic finish and to repair tablecloths, floor coverings and the like. This fascinated Chuck so much that he spent his evenings and weekends in the small lab his company provided him.

He was studying the behavior of photopolymers under UV light and one night had found the optimal settings to make a real object with it. In 1984, he filed his patent for stereolithography and in 1986 founded 3D Systems, now a world-renowned company.

In the 1980s, Carl R. Deckard was a mechanical engineering student at the University of Texas while also working at TRW Mission, a company that manufactured oil recovery products. The production machines were state of the art and CAD was already in use. But from Carl’s point of view, too many castings and thus molds were still used.

He worked for several years to realize his idea of being able to make objects without molds. The university recognized the potential of his work, so he was able to dedicate himself to improving his technology during his master’s degree and then as a doctoral student.

A patent that loved the university

The patent for selective laser sintering (SLS) was filed in 1987 and granted in 1989. Outside companies licensed the technology, earning the University of Texas the highest patent revenue of all its patents for several years.

When mechanical engineer Steven Scott Crump wanted to make a toy frog for his two-year-old daughter, he connected it with his idea for a machine that would create 3D objects. So he started mixing wax with plastic in the kitchen of his house.

Hot glue gun as a starting point for a successful story

Using a hot glue gun, he managed to produce 3D objects. According to lore, the frog looked more like melted plastic than a real frog. Over time, he came up with the idea of attaching his hot glue gun to an apparatus with XYZ axes to automate production.

Thus, he invented Fused Deposition Modeling (FDM) and patented the process in 1989. In 1992, the first fully functional FDM printer came onto the market. His wife Lisa and he founded the Stratasys company, on whose board of directors he still sits today.